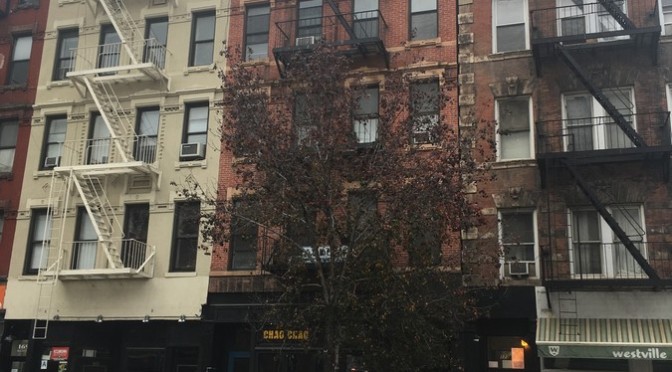 Originally released in Chiller Than Most fanzine, issue 5. (Click the picture for bigger size.)

This innocuous construction was built in 1900, in 117 years this building tells some great history. In 1976, Hyman Lieberman was arrested for possessing 2400 pounds of mannite worth $500,000 which he was distributing to drug dealers for use in cutting heroin. Lieberman owned a store at 171 Avenue A, which he had previously owned and sold in 1966. The burnt-out abandoned building at 171 Avenue A became the epicenter of the New York City hardcore movement, it was down the block from A7.

It was pretty much a community center ran by a guy named Jerry Williams, perfect for hanging out, and a great meeting place too. Jerry was a key figure in the burgeoning early 80s NYHC scene, recording bands at his 171A studio and doing sound at CBGB, as well as playing guitar in Bloodclot and later on with Irate (NYC). He produced records for the Bad Brains, Token Entry, Antidote, Reagan Youth, Warzone, Cro-Mags, Murphy’s Law, and a ton more. In September 1980, Williams began renovating the interior of 171 Avenue A, which had formerly been a glass shop. By November, 171A housed after-hour parties where downtown bands like the Cooties performed. Kids used the space for everything: they put on shows, recorded bands, screened movies. Williams successfully pulled off gigs at 171A every Friday and Saturday night for a few weeks until a rival club tipped the New York Fire Department that it was selling liquor without a license. The NYFD closed it down before a New Year’s party, so it was converted to a rehearsal space. They charged $6 to $8 per hour for bands to rehearse and had a gigantic PA system. 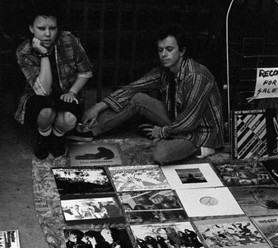 A year later, Jerry’s friend Dave Parsons opened his Rat Cage Records store in 171A’s cellar. There he started the label Rat Cage Records, and put out these awesome records by Beastie Boys (Polly Wog Stew EP), Agnostic Front (Victim In Pain LP) and The Young And The Useless (Real Men Don’t Floss 7″).
Rat Cage was actually the first advertiser in The Big Takeover, way back in issue #8 from December 1981. Their ad described some of their services: “T-Shirts, import records, sold & traded clothes, fanzines, badges and local shit.”

– 171A is the place where I wrote and recorded the first Cro-Mags songs. Don’t get me wrong, Harley and John wrote many great lyrics to songs but the brutal truth is that I am the Cro-Mags’ founding member. I know who wrote what, what happened and when it happened, who did or didn’t do this and that!* (* Yes, it was irony.)
– 171A is the place where the Bad Brains recorded one of the most influential hardcore releases of all time, the legendary ROIR cassette. The Bad Brains played a gig at 171A in May 1981, Jerry Williams recorded it on reel-to-reel tape. The band really liked the sound and returned to 171A, the Bad Brains spent the rest of 1981 in the East Village, recording with Jerry. 12 of the 15 tracks on the album came from these sessions, while “Jah Calling”, “Pay to Cum” and “I Luv I Jah”, were from Williams’ live recording in May.

– 171A is the place where Jerry Williams screened music documentaries (“Shellshock Rock” / “Self Conscious Over You” documentary movies about the evolution of the punk scene in Belfast) in the evenings, and between the two flicks the Stimulators performed. Harley Flanagan was 14 old at the time, he was playing drums for the Stimulators.
– 171A is the place where Harley Flanagan used to practice when he was trying to get the Cro-Mags together. He jammed there with the Bad Brains, who lived there at the time. When Harley was putting together the Cro-Mags, with the original lineup was him on bass, ex-Mad drummer Dave Hann, and a pre-Even Worse Dave Stein on guitar, and Louie Rivera (Antidote) was singing with them until Eric Casanova stepped into the picture.
– 171A is the place where Circle Jerks, Angry Samoans, The Subhumans all jammed and recorded.
– 171A is the place where Beastie Boys played their first gig, they opened up for the Bad Brains.
– There was an infamous night when DOA were playing at A7 and then they went over to 171A and did their set and then they went back over to A7 and did another set and the crowd just followed them back and forth.
– 171A is the place where Williams formed a band comprised of Bad Brains roadies who called themselves Bloodclot. They did perform many live gigs opening for the Bad Brains. Although Bloodclot never released an album, they only recorded a demo at 171A.
– 171A is the place where the Beastie Boys recorded the “Polly Wog Stew” EP with producer Scott Jarvis. Utilizing a four-track and an Echo-plex, they were kicked out of the studio after two days so they mixed it in Jarvis’s apartment.